Mike Papantonio is a truth-teller, a crusader who uses fiction to entertain and inform his readers about some of the most pressing issues of our time. In each of his thrillers, from Law And Disorder to Law And Vengeance, to Law And Addiction and now Inhuman Trafficking, he lays bare the conspiracies and white-collar crimes that hurt ordinary Americans — and that are rarely covered by the national media.

A senior partner of Levin Papantonio, one of the country’s largest plaintiffs’ law firms, Papantonio uses his own cases as springboards for his novels. He has aggressively taken on Big Pharma, tobacco, weapons manufacturers, and the automobile industry, among other bastions of corporate greed.

One of the youngest inductees into the Trial Lawyer Hall of Fame, Papantonio is also a well-known media presence as host of America’s Lawyer on the RT America television network and co-host of the syndicated radio show Ring of Fire. A skilled musician and athlete, he is based in Pensacola, Florida. 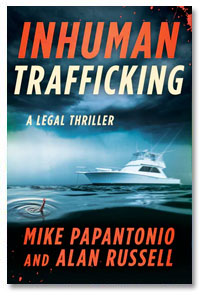 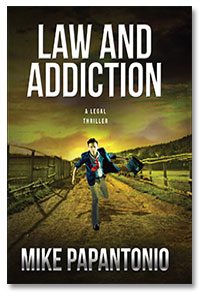 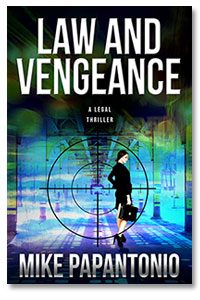 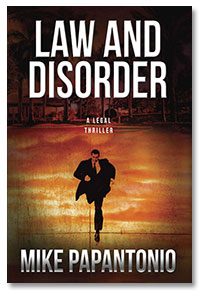 A fast-paced thriller in the tradition of John Grisham, Joseph Finder, and John Lescroart

For Nick “Deke” Deketomis, going where angels fear to tread in waging legal battles has long been a way of life. As managing partner for one of the nation’s largest plaintiffs’ law firms, Deke has gone toe to toe with some of the largest corporations in the world. His firm specializes in the tough, even quixotic, cases that few lawyers would dare to take on. Like human trafficking.

More harrowing and more serious than Law and Addiction

A couple of years ago, we reviewed a legal potboiler by Mike Papantonio which not only told a harrowing and exciting tale, but presented some serious concerns about drug addiction. Inhuman Trafficking does the same. If anything, the story is more harrowing and more serious than Law and Addiction...Inhuman Trafficking can open our eyes to the evils of human smuggling and prostitution. That is what Law and Addiction did with opioid abuse. Perhaps there is something we can do. It might be a dangerous call, but there are things that can be done even by lawyers. Yes, sadly, there are lawyers, who are more interested in power and money than justice (see a warning in James 5:6), but some are helping people who really need it.

A suspenseful ride to the finish.

The book that shines light on the worldwide scourge that is human trafficking is a suspenseful ride to the finish.

The ending is filled with twists, turns and with a final scene that will make you wonder who lives, who survives and the result of their cases. Young girls fall prey to men who promise them the world and are there to have them work for nothing and for the pleasures of some sick people. Authors Mike Papantonio and Alan Russell take readers inside the minds of sex traffickers, deceptions, bribes, betrayals and one girl named Lily who was used as a pawn as so many were, are and will be in the future if more eyes are not on it, if every state and country are not vigilante and is some countries stop looking away from what is happening right in front of them.

I strongly recommend it

This is a well researched, fictional book that shines a light on one of society’s more despicable cockroaches, human trafficking…The book is written as a novel but sheds light on a societal issue that is frequently ignored. There is action and characters you can like as well as a cast of deplorable villains...  it is most definitely worth reading.  I strongly recommend it.

Pick of the Literature

Hard to put down, the story, based on facts, kept me reading most of the night.

Mike Papantonio‘s latest work is fascinating, disturbing, and unfortunately based upon the truth of human trafficking. The pace of the novel is fast and makes it hard to put down, I lost sleep last night reading until the wee hours. I like how Papentonio includes Local color and bases his story on the thousands of young womens’ plight as a sex slaves, helping to make us aware that these crimes are committed in most cities in the U.S. Keep up the good work Pap!

A tough story, well-told and fast-paced.

Much of the subject matter -- sex trafficking along America's highways and byways -- is shocking, but no surprise. The authors bring the human and emotional toll home in vivid detail, and as part of a plot that never quits. The story moves swiftly, and excitingly, at all times. If these two authors write another book, sign me up! (I was already a fan of Alan Russell's from way back.)

Would make a great film

This would make a great film, it is a fast paced legal thriller. The focus is on the grim topic of sex trafficking.

As someone who has previously tackled the subject matter, I can say that Inhuman Trafficking is on the nose with its realism and at times disturbing depiction of a serious problem in the USA and other countries. Authors Papantonio and Russell deliver a fast-paced legal thriller with hard-hitting conflict—sometimes 'Bondian' action!—that introduces an engaging team of protagonists and an equally despicable group of baddies.

In this well-crafted and suspenseful legal thriller, the reader will witness how innocent victims are manipulated by the criminal world of human trafficking and the atrocities they must endure.

Author of The Chairman and Trust Fund

A propulsive legal thriller fueled by the righteous indignation of a legal team fighting against one of the darkest scourges of modern society: the invisible epidemic of sex trafficking and sexual slavery. Through Machiavellian courtroom maneuvering, undercover investigation, and military-style interventions fraught with personal danger, trial attorney Nick 'Deke' Deketomis and his team of life-scarred legal heroes put everything on the line.

Trial attorney and author of the bestselling Philadelphia Legal Series

This was definitely a page-turner

Reading this book made the opioid epidemic very clear and real, but it was also an entertaining work of fiction.

Books I Think You Should Read

This was definitely a page-turner

Mike Papantonio writes though provoking legal thrillers with depth and credibility…Law and Addiction takes on the opioid crisis and will make your blood boil.

Law and Addiction is compelling

This book was engaging, a fast read, and had characters that were written well and believably realistic from the newly minted idealist lawyer Jake Rutledge to the West Virginia county chief prosecutor Eva Whistler, all of these characters felt real.

The Oddness Of Moving Things

Mike Papantonio has a phenomenal career background. He has the guts to take on the powerful industry giants to help the little guys in the quest for what is right. Be ready to be impressed. In his books, Mike Papantonio lays out some real chills which mirror current times, using his cases as a foundation. In Law and Addiction, he does not disappoint. It reels you in from page one (1), which is a big deal for me and my book worm addiction.

As readers, we get to see the desolation and heartache the influx of drugs have caused. We get a taste of addicts, people in recovery, drug mules, and people who take advantage of the situation financially. The author is clearly well-versed in this type of law and in this growing crisis. This is a book people should read to help understand why the opioid crisis is not going away and why each of us should care.

I was struck by how emotional this book made me feel

It did a great job demonstrating the horrific opioid epidemic as well as creating empathy for the individuals struggling with and/or trying to overcome an addiction. Overall this was a well-researched, timely release about a young lawyer’s fight against an epidemic that has taken the U.S. by storm.

Papantonio presents much of the factual information found in Dreamland but in a fictional manner that his bound to capture more readers. Novels sell better than history books and Papantonio makes it easy to learn about the crisis. As a former counselor who had some real-life experience with drug abuse, I did not see a single thing in this book that wasn’t accurate, frighteningly accurate.

Papantonio brings awareness to Big Pharma's tactics, and the risks involved when challenging the bigger fish in the pond

This timely story provides insight into the ongoing opioid epidemic in the United States. Using entertainment to educate the reader about the high-level class action lawsuits currently pending against the opioid industry, Papantonio brings awareness to Big Pharma’s tactics, and the risks involved when challenging the bigger fish in the pond. This is a perfect novel to put on your summer must-read list.

Excellent mix of thriller, law, corporate greed, and drug addiction epidemic. The timeliness adds to the tension of the excellent writing and authentic characters.

Mr. Papantonio uses his real life cases as springboards for his novels

“Law and Addiction” is a must-read and recommended for fans of smart legal thrillers, but it also has elements of suspense and mystery with some politics mixed in to appeal to most readers. Since Mr. Papantonio uses his real life cases as springboards for his novels, readers can surely look forward to more in this exciting series.

Mike Papantonio has written a number of legal thrillers and also happens to be a practicing attorney with an impressive resume. My first thought is when does he actually have time to write books?! He does so many things but clearly he does them all well.

Real-life drama at its finest

Law and Addiction is real-life drama at its finest — a book that clears away the darkness page by page, spotlighting a profound truth about our society through expert storytelling.

This is an entertaining story with a message behind it

This is an entertaining story, but there is a message behind it as well. It illustrates how the current drug crisis differs significantly from those in the past. After all, what can you do when at least the manufacture and some parts of the distribution chain are legal?

Co-host of the Ring of Fire radio show Mike Papantonio, AKA America’s Lawyer, appears on Politics Done Right to discuss how Pharmaceutical Corporations have decimated the health of millions. Sadly, it is the double whammy. We pay Big Pharma to infect millions. And to detoxify and heal them, we pay Big Pharma again. That is the real story of socialism in this country. Mike recently wrote the book Law and Addiction: A legal Thriller which explores the opioid epidemic in a fictionalized thriller.

Mike Papantonio is the author of Law and Addiction. A truth-teller, he is a crusader who uses fiction to entertain and inform his readers about some of the most pressing issues of our time. In each of his thrillers, he lays bare the conspiracies and white-collar crimes that hurt ordinary Americans — and that are rarely covered by the national media.

The multidimensional brilliance of Mike Papantonio shines brightly through this can't-put-it-down legal thriller. For a deep dive into law and politics, power and those who fight it, and the very human conflicts that drive and tear at us all, read Law and Addiction!

This compelling read is both entertaining and edifying

This compelling read is both entertaining and edifying, and the story is more than timely. In his real life, attorney Papantonio is making it his mission to bring justice to those who unleashed the opioid scourge upon our country; in this fictional tour de force he has drawn characters engaged in this life and death struggle that the reader can't help but care about. Bravo!

#1 bestselling author of Burning Man and Guardians of the Night

The opioid addiction crisis in this country is scary

The opioid addiction crisis in this country is scary. This fictional account has been getting rave reviews and was even featured in Publishers Weekly.